Following the closure of the school on Wednesday last week, Upper classes (form four and three) students reported back for the tuition on Monday 1st August. Most of the students are seen so busyt in search of a better future. Form four Agriculture students are seen mostly looking at their project crops as they target to reep good marks from the project. Other classes are also running well.
Below is a photo of a student working on her piece of land 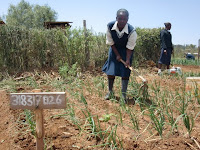 Richard Walker(Jim Walker's son) bought the school a basketball which will be used in with the new basket court(Funded by Jim Walker). the school games captain vowed to lead the school qualify for the Provincial competition come next competition. Below is the Principal handing over the ball to the games captain 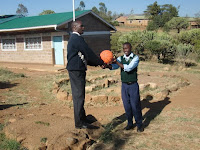