Form one the year 2011 reported on Monday the 31st Feb 2011. Unlike in the past when we had mostly one or two students in the forst day, this year round we had around six of them in the first day.
Due to the fact that these students don't have a lot of work to do, they decided to keep themselves busy with the laptops.
They were so busy with the machines and at the ned of the period, some of them were so happy that they joined Ntugi Sec school and promised to encourage their other friend to join them. Below are some of the photos of these "newborn" with the machines in the computer lab. 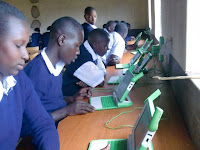 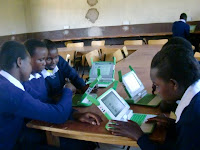 Apart from the form ones, we are expected to get the results of the previous form form exams by the end of theis month, we are hoping thatl give us good results.
On games, this term being a very busy term with differnt co-curricular activities, the cross-country people and the other athletes are busy preparing for the same. We wish them success in their preparation.